Back to all posts

Mom's Moved In ~ Its one Day at a time 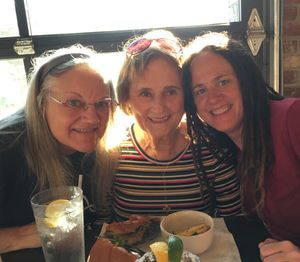 Mom is settling in well and doing really good. I am very thankful that she is at the top of her base level for health right now so I can take her around Fayetteville and show her the sights. Last night Andrea, Mom and I went to dinner with Lynda and had a great time. She was beaming. Part of that was that she loves Lynda and was happy to see her, part of that was that she was sitting in the sunshine but most of it was just a glow that I have not seen from her in a while and it melted my heart,

We are settling in too, still unpacking and figuring out where to put everything.Andrea mowed the entire yard front, back and side (its pretty big ya'll) and when I asked her if I could do some she growled at me. ;) She loves to mow and has been wanting her own yard for SO LONG. She really wanted the "first mow" all to herself. She ROCKED it.

Mom keeps asking me if there is anything she can do to help. I want to oblige but I have to consider what is safe and frankly, doable. Today I realized my clothes in the dyer needed to be folded so i thought about it. She could sit by the bed and I could set the basket next to her and she could fold without standing... not too heavy... it might just work. I asked her if she wanted to fold my clothes and she lit up - YES ! she said... (that's a big change from childhood just FYI) and OMG ya'll my mom folded my clothes. FLASHBACK! Wow. Now she is relaxing watching the news with the remote ear phones I bought for her for just that reason. Later we will run errands. Life is good. We are blessed. Step by step I will figure this out. <3